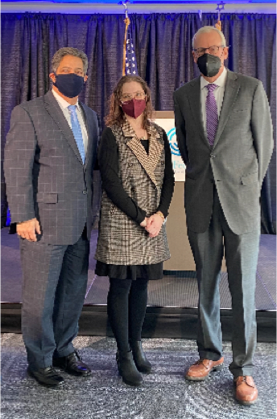 The state program, established in 2019 by the passage of Act 83, provides grants so that nonprofits statewide – including synagogues, Jewish and other religious day schools, camps and other nonprofit institutions – can better protect themselves against terror attacks. It was created in the wake of the mass shooting at Pittsburgh’s Tree of Life synagogue in October 2018, the deadliest attack ever against America’s Jewish community.

Teach PA, along with Pennsylvania Jewish Coalition and Jewish Federations across the state, worked closely with legislators to allocate the 2021 funding, which provides individual grants of up to $150,000 apiece. This enables synagogues and other houses of worship, as well as other vulnerable nonprofits to purchase and install a range of security equipment as well as hire and train security personnel.

Including this year’s allocation, Pennsylvania’s Nonprofit Security Grant Program has allocated a total of $15 million since 2019 to organizations considered at risk of attacks for hate crimes. The FBI’s most recent hate crimes report notes that Jews remain by far the religious group most targeted for hate crimes, comprising 57.5 percent of such attacks nationwide.

Pennsylvania’s Nonprofit Security Grant Program is one of many initiatives Teach PA has supported and undertaken over the years to increase safety and other needs for some of the state’s most vulnerable populations. In the wake of the massacre at Sandy Hook Elementary School, Teach PA – along with day school advocates – successfully pressed lawmakers to create the Safe Schools Targeted Grant Program for nonpublic schools which may provide funding specifically for security equipment, personnel and programs at Jewish and other parochial schools, making the Commonwealth the first state to establish such a fund.

“The rise of antisemitism and other hate crimes continue to be a stark and painful reality in Pennsylvania and nationwide, and the horrifying event in Colleyville magnifies the gravity of the situation”, said Arielle Frankston-Morris, executive director of Teach PA. “We are indebted to Gov. Wolf, Leader Costa and Rep. Frankel, and all of the members of the General Assembly who supported this effort, sharing a vision of a safe, bright future for all Pennsylvanians and ensuring that vulnerable groups are readied with crucial funding and resources when it’s needed most. We also appreciate our coalition partners including Jewish Federations across the commonwealth and the Pennsylvania Jewish Coalition.”

Dan Mitzner, director of government affairs for the Teach Coalition, the umbrella group that includes Teach PA, said, “The rise of antisemitism and other hate crimes continues to be a stark and painful reality in Pennsylvania and nationwide. By garnering support to fund the state’s Nonprofit Security Grant Program, the Commonwealth’s leaders have demonstrated their commitment to doing the right thing and making the state a safer place.”

Said Sen. Jay Costa, who spoke at the press conference, “Folks should be able to gather, to worship, to play without fear of violence targeted at them because of who they love, their faith or their ethnicity. I wish we didn’t need these grants; I wish our community organizations were safe from acts of hate – but we’ve seen that’s not the case. This grant program has helped and will continue to help groups protect themselves and prevent violence. I’ll continue to fight for its funding as long as it’s needed.”

About Teach PA
Teach PA, a division of the Teach Coalition, was founded in 2013 to advocate for equitable funding for Pennsylvania nonpublic schools. It has helped secure over $70 million in scholarships for Jewish day school students and spearheaded the creation and maintenance of a school safety program that has delivered much-need safety grants to 13 nonpublic schools. Currently, 23 day-schools and yeshivas receive support through Teach PA’s efforts. For more information, visit https://teachcoalition.org/pa/.