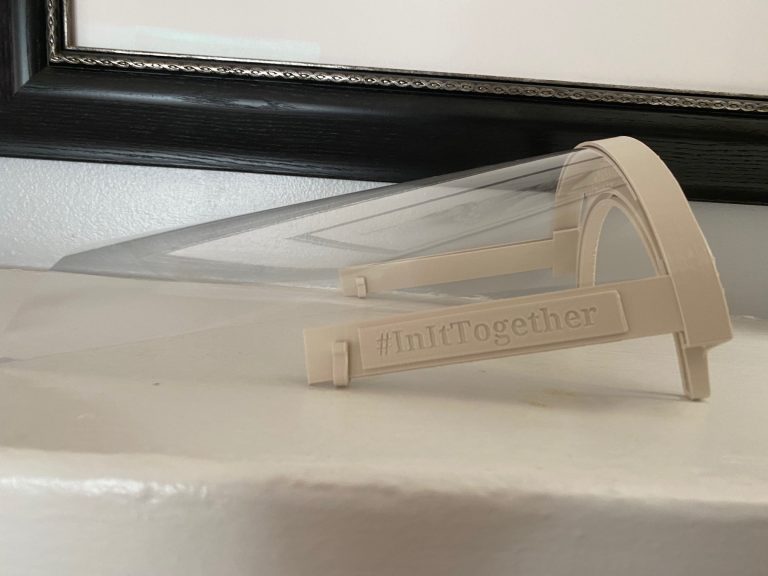 There are many ways to show support for medical personnel who are risking their own safety in order to save lives during this pandemic. Some people have taken to standing on their balconies to cheer the doctors and nurses as they end their shifts in the ER. Others, including a growing number of STEM teachers at schools in the Teach Coalition network, are putting their expertise and equipment to work producing desperately needed face shields.

The teachers’ goal is three-fold. First, they want to protect doctors and nurses while educating their students about the role that engineering and design play in solving ‘life and death’ challenges. Just as important, they want to model for their students the importance of community involvement during difficult times.

“My goal is for students to come away with the message that social responsibility is a tremendously important thing, and that having any impact is more important than having no impact at all,” said Aryeh Tiefenbrunn, STEM coordinator at the Torah Academy of Bergen County (TABC).

Tiefenbrunn began the face shield project as soon as he emerged from a two-week quarantine. He picked up the school’s 3D printers and began manufacturing plastic headbands with three holes to which he attaches the plastic shield. In his attic, he’s producing roughly 30 shields per day. He also plans to share with his students can produce shields without 3D printing technology.

“With the amount we are producing, we cannot hope to fill the need that exists in hospitals, right now,” Tiefenbrunn said. “However, I want my students to see that, if they have the ability to do something, they should do their best to make whatever impact they can. I hope they will be inspired to make their own masks when I share that method with them.”

At the Hebrew Academy of Five Towns (HAFTR), Education Technology and IT Director Benjamin Gross is leaning into the message that STEM is a pathway for students who want to solve large problems, either through engineering or design. His is a hands-on learning approach that emphasizes the student-learning experience over quantity of shields produced.

“I challenged the students to make a better shield,” Gross said. “It’s important that we’re helping people but if schools are going to do this, we have to make it a teachable moment — including understanding engineering and design process.

“Not every kid is an engineer. Some are designers and (the message on the shield) is part of the design process.”

Rabbi Gil Perl, head of school at Philadelphia’s Kohelet Yeshiva, is following the example set by the U.S. during world War II, when manufacturers across the commercial sector re-tooled their factories to power the war effort. In Perl’s case, he has turned the yeshiva’s STEM “makerspace” into a light- manufacturing shop capable of producing some 200 shields per day, while partnering with other schools — Perelman Jewish Day School, the Shipley School, and the Lower Merion School District — which are printing headbands.

While Perl has made Kohelet a legitimate manufacturing hub for face shields, he believes that modeling menschlichkeit is a critical part of the project as well.

“We have four character values that hang from the ceiling of our hallways, which kids pass by multiple times per day: honesty, empathy, respect and responsibility,” said Rabbi Perl. “One of the most effective methods of teaching is modeling or teaching by example. I think, therefore, our kids are getting a powerful lesson in what empathy and responsibility look like in action.”

Even at the K-6 level, the COVID-19 crisis has put on display expertise of the yeshiva/day school STEM community. Rebecca Shapiro, a science teacher at Westchester Day School (WDS), is running three separate printers and producing shields, for places like Montefiore Medical Center, based on different design types for each printer.

While her elementary school students are not involved in the actual design and production of Shapiro’s hospital grade shields, they have been busy making “thank you” cards for healthcare workers and have learned importance of contributing resources when society faces a large-scale crisis.

“I think it is important for everyone to feel useful during a time of crisis,” Shapiro said. “I hope that the students can feel proud that WDS is making an impact.”