Tackling the Tuition Crisis with Teach NJS and Hillel Yeshiva 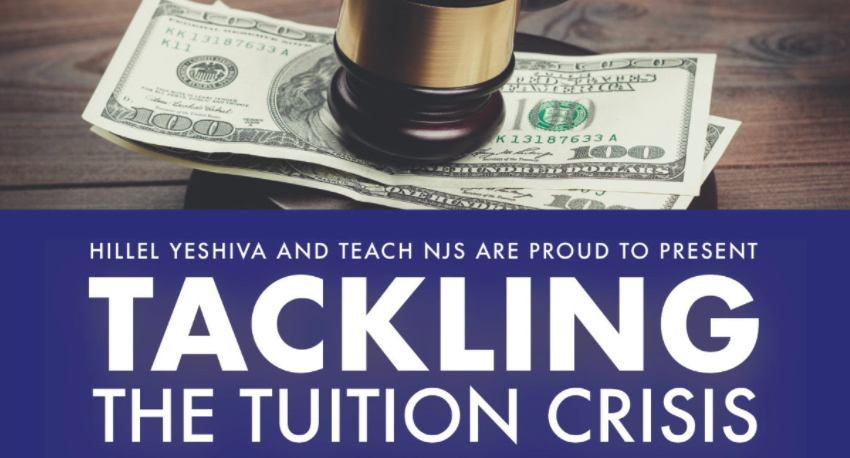 With the price of many of the Yeshivot within our community continuing to rise to great heights, the concept of a tuition crisis existing has never been more prevalent. The Teach Advocacy Network, also known as Teach NJS, which stems from the Orthodox Union recently hosted an event in response to this exact problem to educate parents on the facts of the issue and what can be done to improve it.

Hillel Yeshiva of Ocean NJ and NJS came together to host Tackling the Tuition Crisis with special guest speaker Maury Litwack, executive director of the Teach Advocacy Network on Nov. 20. Litwack lectured parents on this imperative topic with the goal to educate the community on what the network does and how everyone can and should get involved. A crowd of concerned parents listening to Litwack discuss the tuition crisis at Hillel Yeshiva.

The Teach Advocacy Network is present in six states in the United States including  New York, New Jersey, Pennsylvania, Florida, California, and Maryland. Volunteers such as Ralph D. Hanan, the Deal community representative for Teach NJS, work tirelessly to see that private schools get their share of government funding.

Currently in New Jersey, government funding for private schools goes to four major areas: security, text books, nursing, and technology. Hanan reports that the current grants Jewish schools and private schools are receiving for these areas are far too low. Ralph Hanan talking to the crowd at last week’s event at Hillel Yeshiva.

Schools, and especially Jewish schools, are targets for terrorism and are subject to anti-semitism. This means that many Yeshivot need to invest more in their security. Unfortunately, the government grants provided to private schools don’t even cover the cost of one security guard. As a result, our schools are forced to pay out of pocket for many expenses that should be taken care of by the government.

Not only that, but our community pays high property taxes that continue to rise. The irony of those taxes is that most of the money being payed goes to public schools that community members don’t benefit from. Teach NJS feels that it is about time that the government gives back to our schools.

Statistics of Teach NJS’s success in their goals to help alleviate the tution crisis.

Litwak, Hanan, and their team are working to insure that our schools get the funding they deserve and have seen progress from their efforts thus far. One of the most effective ways that the NJS team makes a difference is by reaching out to local and state politicians to make connections to help bring them closer to their goal. Teach NJS works with and has hired professional lobbyists to speak on our behalf about these issues.

The team also insists on putting a face to the cause and get parents to come out to Trenton NJ to speak directly to lawmakers. Ralph Hanan recently testified in front of the state assembly budget committee for increases in funding to our schools and they were receptive to his plea.

So what is the tuition crisis? Basically the issue is that Yeshiva day schools have a short ball every year in their operating budget that gets funded primarily by donations. The average parent struggles to pay tuition due to a number of factors such as general cost of living increasing, property taxes going up, etc. If our schools get the state assistance they need, this might help alleviate the tuition costs. Also, this could potentially lead to teacher salary increases and bonuses which could mean increasing the quality of education offered.

There are many ways one can get involved with the efforts to alleviate this tuition crisis. The first and most important step is to become educated on the circumstances that private schools are under within each individual state that leads them to the crisis at hand. The next thing to do would be to get out and vote on a regular basis, especially when it comes to your local elections.

You can also volunteer when Teach NJS asks for citizens to accompany them to events in order to show politicians who we are and what we stand for and to generally rally for our schools. And finally, you can donate to the Teach Advocacy Network in your area which will, in turn, enable them to fight the good fight for all of us.

For more information on the tuition crisis and to learn how to get involved or donate, head to their website.